Exciting developments in the fight against cancers

For years scientists have been trying to find ways to better harness our own immune systems to better fight off cancers. Since 2011 alone, there have been promising and significant advances in this approach to cancer treatment. Right now, there is more good news and progress in fighting cancer using an immunotherapy type of approach.

Two medical research announcements are giving hope for a new immune system weapon against at least two types of cancer.

As described in a BBC story today, "A pair of cancer drugs can shrink tumours in nearly 60% of people with advanced melanoma". Melanoma is the most dangerous form of skin cancer, and in an international trial of 945 people, it shrank tumours by 58%. Tumours continued to shrink or remain stable for an average of 11.5 months. UK doctors say they have never seen tumour shrinkage over 50%.

One patient in the story was given 18-24 months to live in 2013, but is now "feeling amazing". Medical research, not surprisingly, especially in the very complicated area of cancer, takes years of research to make any advancement, and with drugs involved there are side effects. In this case, half of patients had non-serious side effects, but there are potentially serious side effects. It also still remains to be seen why some people benefited while others did not. So, there is still much to be done to see why, and how to improve upon this treatment.

A clinical trial has more than doubled the life expectancy of lung cancer patients.

Lung cancer is the most deadly cancer. In this trial, patients with advanced lung cancer lived an additional 9.4 months with standard treatments of chemotherapy. With the drug Nivolumab, they lived over 12 months longer, and some, over 19 months longer. According to Cancer Research UK, it is giving real hope to people who had very few options. 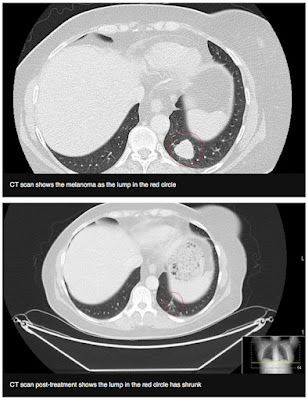 "It's really exciting, I think these drugs will be a paradigm shift in how we treat lung cancer."
- Dr Martin Forster, University College London Cancer Institute


Here's how both the above therapies work:

Normally, our immune systems defends us by sending out "killer" cells for diseases, and is often very successful. However, some cancers like lung cancer, produces a protein called PD-L1 which switches off any part of the immune system that tries to attack them. The drug used, Nivolumab, ".. stop cancers turning off the immune system so the body can keep on attacking the tumour... they also stop the cancer cells from hiding from the body's own immune system."

In 2011, researchers at the Memorial Sloan-Kettering Cancer Center in New York city, took out patients' T-cells, genetically modified them with a "killer" virus, put back into patients, and went on the attach of cancer cells. It had astounding results. This was also a type of immunotherapy.

Every approach in fighting cancer needs to continue, but this one currently hold significant promise not just for melanoma and lung cancer, but for other types as well.

Charlie
a few likes - outdoors, writing, photography, current events & past ones too